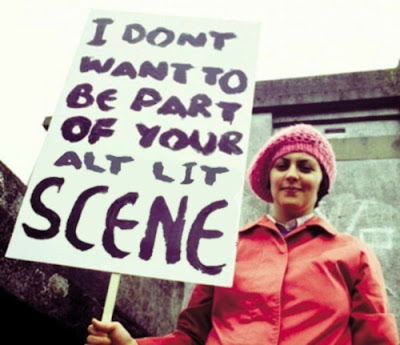 It's all about Alt Lit now.
Don't bother juxtaposing surreal and mundane scenarios and images any more.
Don't bother letting me know it's 'only writing.'
Don't bother letting me know these fictitious characters aren't real and my emotional pull towards their made up lives in made up situations is contrived.
Don't bother making no sense to confuse me into realising I was too 'into' what you've written.
Don't bother Alasdair Gray.
Don't bother Ian McEwan.
Whatever Joyce.
It's all about Alt Lit now.
This may be my most pretentious post yet.
So, I've been reading a lot of Alt Lit recently. And reading a lot about Alt Lit recently. What the fuck is Alt Lit?? Well, this kind of is.
As far as I can discern, the term is an abbreviation of 'Alternative Literature' with a deliberate nod towards computer lingo. On several different blogs this discussion has been raging recently, but the general consensus seems to be that it is fiction that utilises new social media as intrinsic to its form. The writers (such as Tao Lin, Marie Calloway) tend to be students or recent MFA graduates in their mid twenties. All have blogs. All publish stuff in chapbooks and on Facebook. Thank you Zuckerberg for creating a platform for a new medium of literature to spawn on. The style is brief, concerned with mundanity, cuteness and personal sadness. If you haven't read it yet, I suggest Calloway's Adrien Brody as a recent famous example.
Because it's so linked with social media, Alt Lit seems to also be very concerned with the writer, as apposed to the writing, in a very 21st Century Big Brother celebrity sort of way. Marie Calloway writes about a character called Marie Calloway having sex with older men who she's been chatting to on the internet. She posts pictures of her naked with semen on her face. People like me find it fascinating for some reason and spend their free time blogging about it. There's something a bit Jersey Shore about it all.
In some ways it's very direct. In others it's very pretentious. But then those at the forefront of a movement have always been considered pretentious trouble makers. Think establishment rockers like Dali, Van Gogh, Manet, Picasso, Joyce (again) etc etc. It's authentic to the writer as it comes directly from them, not through a publisher, resulting in more idiosyncrasies and more grammatical errors. It is essentially the literature of our time. Like it or not, you can't deny the contemporary-ness of it.
I have just spent the last few hours writing a short story called Crying, about a couple who meet at a party and then have a vague relationship solely through email. I am probably going to include it in my little e-collection of short stories I am self publishing next month. The likelihood is also that I will publish it here first. While Alt Lit in theme I am hoping it will be not be so concerned with form that personal connection will be forgone. The general gist of the collection is an emphasis on personal disconnection, mostly through media connections. There's a story told solely through dialogue on gay dating app Grindr. There's internet blind dating. There's language and cultural barriers that make connecting with another person difficult. My intent is never to overshadow the emotional intent of the story with the way it's told - not in that way, anyway. I want them to be true - because what is the point of fiction if it isn't true?
I still don't have a title. Ideas??!
Posted by HENRY FRY at 8:15 PM

My concern with alt lit is that the narrative is often obscured by the desire to focus on image or form or by being too self-referential. It doesn't sound like this will be the case with your work, which sounds as though it will have a strong plot as well as being stylistically alt lit. However, its all too easy for alt lit to alienate its readers by moving too far from the story telling element of fiction. What do you think?

I totally agree! Most of the stories I've read that can be described as being Alt Lit seem to care little about their characters, especially their emotional or psychological development. Denis Cooper's stuff is alt lit in style and he similarly alienates his audience from his characters. I read an interview in the Paris Review where he says he does this deliberately to an extent, in a kind of nihilistic way. But I don't think this is the case with more contemporary alt lit pieces - I think they're either poorly conceived/edited or don't care about their characters all that much. There is certainly a self referential quality that makes them super pretentious.

Have you read The Rehearsal by Eleanor Catton? A few years ago that was heralded as 'the future of literature' by the Guardian, and that, in a similarly academic way, is also concerned with form rather than narrative. I think it's only really interesting if you're a writer or an art critic. Unless you can connect to a character in the piece you lose interest pretty quickly. Hence the rise in vampire fiction, one would imagine!! :)

I've never come across Eleanor Catton - but I'd be interested in reading it. I think you're right though, the average reader is more interested in an engaging plot and believable characters. Although, sometimes, racy sex scenes are enough to pique interest a la Fifty Shades of Grey... 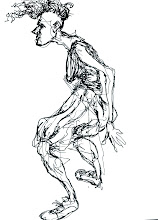 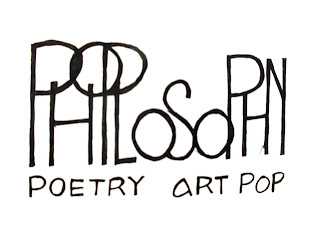 Unless stated otherwise, all writing published is the property of the author of POP PHILOSOPHY. If you want to use any of it, ask me at: henry_fry@hotmail.co.uk. Most of the images and videos have come from derived sources and as such cannot always be credited accurately, but I will endeavor to try! If I have used anything of yours and you want it down, do not hesitate to ask me.